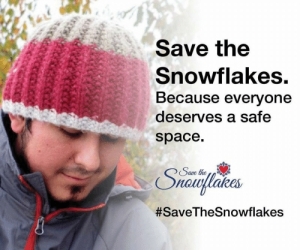 From washed up rockers and Hollywood actors , SpongeTed Squishy Pants Nugent ( who once soiled himself to avoid the draft ) , James Woods , Roseanne ‘Ambien Made Me Do It’ Barr , Tim Allen.

From social media , to right-wing media.

Conservatives no longer have a safe space of their own. From college campuses to the steps of Washington DC , they have all been taken over by mobs of socialist , pansy libtards who just can’t get over the fact that Trump won.

Please save the life of one of these delicate snowflakes today , before they become extinct. Make your donation to Save The Snowflakes. Because everyone deserves a safe space , even conservative snowflakes like the above mentioned.

This message paid for by Save The Snowflakes.