October 9th , a fight apparently broke out between students at Northern Arizona University. Steven Jones killed one person , and injured three others.

July 23 , John Houser stood up in a Lafayette theatre in Louisiana , during a showing of Train Wreak , killing two and injuring nine others with a Hi-Point .40 caliber hand gun. The two killed were Mayci Breax , a student at Louisiana State University , and Jillian Johnson , 33.

These are just a few of the shooting that have occurred this year.

January 8 2011 ,  Jared Loughner pulled out a Glock semi automatic and shot congress woman Gabby Giffords in the head as she spoke to a group of her supporters in a Safeway parking lot in Arizona. Eighteen others were also shot. Six died , including nine-year old Christina Taylor Green.

July 20 , 2012 , James Holmes used multiple firearms to kill twelve people and wound approximately seventy others during a showing of The Dark Knight Rises , at the Century 16 movie theatre in Aurora Colorado.

And of course , who can forget the twenty children and six adults who were fatally shot by Adam Lanza with a Bushmaster rifle , at Sandy Hook Elementary School , in New Town Connecticut on December 14 , 2012?

Gun control activists call for stricter gun control legislation  that would  prevent assault  weapons from getting into the hands of criminals. Paranoid gun loving fanatics , vehemently oppose such legislation , claiming that criminals will get them anyway , and claiming that any gun control is an infringement of their second amendment rights. It would seem that they care more about their guns than  saving the lives of others from gun violence. After a shooting takes place , in typical fashion , gun fanatics often blame the victims for not being armed , the mentally ill , liberals , or Obama … anyone and everything but the shooter. They repeat the same nonsense that gun free zones attract gun violence , and that more guns are the solution.

Jan Morgan is a typical Tea Party paranoid gun loving patriot. She represents thousands of paranoid gun fanatics all across America who share an unhealthy obsession with firearms , and who view themselves as “true patriots” for their fanatical love of guns , and their intense hatred of liberals , progressives , Barack Obama ,  and anyone who doesn’t subscribe to their radical views on guns. She is a gun range owner and a self professed second amendment expert. Recently she sparked a bit of a controversy when she announced that her  business was Muslim free , vowing to refuse  weapons training to “the next potential Muslim terrorist” , but obviously not too concerned about the possibility of training a non Muslim terrorist. At a 2013 Gun Appreciation Day rally , she proudly – and falsely – pronounced that ninety million gun owners with over three hundred million guns , killed no one the previous year … conveniently ignoring the fact that events like Sandy Hook , and the Aurora Colorado theatre shootings , were carried out by gun owners , whether they were sane or not.

She’s written a book – Hands Off My Guns! How Obama And Liberals Are Destroying The Second Amendment God Given Rights Of Patriotic Gun Loving Americans – bashing liberals and Obama for taking her guns away , even though Obama has shown no indication of coming close to doing so.

“My book is a sequel to Dana Leoschs’ book , Hands Off My Guns Obummer!” She told Rachel Maddow.  “Dana asked me recently if I would like to do a sequel to her book , and since she and I are so much alike – we both love our guns , you know , so much that we would rather die than let the communist leftist liberals and Obama get their hands on them – I told her I would be thrilled to help her write a sequel. We both know how important it is to get the word out that the communist liberals and Obama can’t wait to take our guns away. They’re just itching for Obama to use executive action. And since the Oregon State University shooting , we knew the book would be especially important since Obama’s remarks about the shooting were so unbelievably appalling , which obviously is to be expected since he’s a Muslim lover.”

Rachel : “What do you mean , appalling?”

Jan : “When he said the deaths of the students were routine , trivial , as if they meant nothing to him.”

Rachel : “I don’t think that’s what he was talking about , Jan.  Correct me if I’m wrong , but I believe he was saying that every time something like this happens , Americans and especially the media  have become numb to it. We’re used to reporting it because it happens so often , but feel  helpless to do anything about it , or don’t really want to do anything about it , because so many in congress – the majority of them republicans – have been bought off by the NRA and gun manufacturers – and those of us in the media are afraid we’re going to offend gun owners if we speak out , and that’s exactly what happens. Liberals and president Obama call for stricter gun laws , and the NRA and many of their members feel like it’s a personal attack on them , and I don’t think that’s the case.

Jan : “You’re wrong. Obama is the worst president in American history , and he’s proved it ever since he set foot in the White House. The deficit is way up , spending is way up , unemployment is sky high , five times higher than when George Bush was in office , and the national debt is at an all time high. The economy is in a complete shambles. Plus , he has pledged his undying support of Muslim , and gay jihadists , he’s unlawfully persecuting Christians by supporting gay rights , denying Christians their religious freedom not to serve homosexuals. And now he wants to rewrite the second amendment to suit his socialist agenda , which to take guns away from all of us law abiding patriotic Americans , and throw us all into Wal -Mart stores that have been converted into Fema prison camps. What does he expect us to do? Save more and live better at your friendly Wal-Mart Fema store?”

Rachel : “Wow , Jan. I fail to see what most of that has to do with what I previously said , but anyway , those are just your opinions and they are highly debatable.” 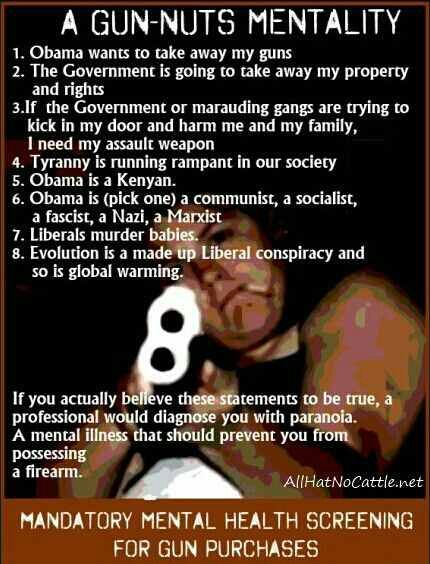 Since the very first election of Barack Obama , a large  number of Americans suddenly became extremely paranoid. They are terrified that the government is going to take not only their freedom , but their guns , imprison them in soviet style detention camps , and create a communist utopia in America. And it’s all because Obama was elected president. They have convinced themselves that he is a foreigner , a communist , gay , a Muslim , a dictator , and a terrorist , who’s only interest is to destroy America from within.

Their evidence  – that he is over reaching his authority with an excessive amount of executive orders , his support of same-sex marriage , and especially his support of sensible gun control – has been debatable to the reasonably well-informed , but his critics and haters are not convinced , even when presented with evidence to the contrary.  They are certain that all of these actions  will lead to the ultimate moral and social decline and destruction of America.

The NRA and many of its supporters have resisted any and all attempts by the Obama administration at gun safety regulations. They believe any regulation to be an infringement on their right to bear arms. To them it is nothing but a sinister plot to disarm true patriotic Americans. Their answer to gun violence  is prayer , less regulations and more guns , thus making America a more dangerous place to live , but in their minds making it safer.

One of these  paranoid Americans is Dana Leosch. Dana is the host of her own syndicated show on the Blaze network , a conservative blogger , a   staunch supporter of the NRA , and a patriotic gun loving American. Dana is the author of Hands Off My Guns! Defeating The Plot To Disarm America. It received critical acclaim from conservative media , but less than favorable reviews from the liberal media. Her new book , a sequel , Keep Your Communist Leftist Liberal Hands Off My Guns! Defeating The Communist Leftist Liberal Plot To Disarm America , Because Gun Control Is The Ultimate Communist Leftist Liberal War On Women , was released this past summer , receiving mixed reviews.

“I am so sick and tired of the leftist libs complaining that anti-abortion and anti- birth control are republican conservative wars on women ,” she said during a recent interview with Fox News’s Megan Kelly.  “Nothing could be further from the truth. Liberals are well-know for lying. That’s all they do. Facts mean nothing to them. They just make stuff up to suit their agenda , which is to lie and deceive as much as possible.

“We know for a fact that the only wars that are being waged are those by the libs. They have waged a war on Christmas now for years. You can’t say Merry Christmas in public these days , or believe that Jesus is white , without offending liberals. Now you have to say Happy Holidays , and believe Jesus is black. As a Christian , that offends me. I have a right to say Merry Christmas if I choose to , and believe that Jesus is white.  That’s a war. A real war. Another liberal war is the war on Christianity. God was removed from schools back in the sixties , and replaced with communist liberalism. Today it’s Islam. It’s being taught in schools all over America , and no one’s doing anything about it. That’s another real war , a war for the minds of our kids.

“Another aspect of the liberal war on Christianity , is their assault on religious freedom. Recently the supreme court ruled that same-sex marriage is now legal in all fifty states , and whether we like it or not , we have to go along with it , we have to accept it. Libs and gays won’t be satisfied until they’ve forced every Christian in America to accept it as not only normal behavior , but  to force their special rights on all of us. We know they want special rights , not equal rights. We know they want to force everyone and especially our kids into accepting homosexuality as an alternative life style , which is exactly what they’re doing right now in public and private schools. They also want to force Christian business owners to violate their religious beliefs and bake cakes for homosexual weddings. They’re acting like Nazis. Just like Hitler did , and just like Hitler , they will stop at nothing until they’ve rounded up every last Christian who opposes the new law , and throw them all into prison.

“The ultimate liberal war on freedom , is gun control. It’s not only a war on all Americans who own guns , but a very real war on women. But libs won’t tell you that. They would have you believe that women who own guns are more likely to be targeted for rape , and that their own guns are more likely to be used against them. They also want you to believe that all gun violence in America is the result of republican extremism , with close ties to racist hate groups , but that’s another liberal lie. We know for a fact that almost all of the mass shootings of the last decade have been inspired by leftist liberal radicals. The Aurora theatre shooter , James Holmes , was a liberal , as was Gabby Gifford’s shooter , Jared Loughner.

“Also we know for a fact that the Obama administration has always used these tragic shootings as an excuse to legislate new laws to further restrict gun rights. Because we know that Obama’s ultimate goal is to take over America with his communist dictatorship , and the way he will do this is through gun control when he has at last succeeded in taking our guns away , and thrown all of us patriotic gun loving Americans into Fema camps.”